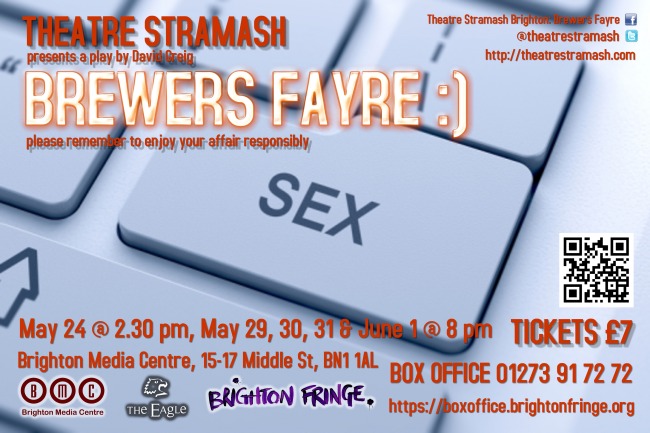 Rehearsals are in full swing for the forthcoming Theatre Stramash’s production of David Greig’s play ‘Brewers Fayre’ and I’m having so much fun. What an amazing bit of writing.

My role is two fold. That of actor and Movement Director. The play is a multimedia tragi-comedy set on the outskirts of Edinburgh, taking in the trials and tribulations of a family who are finding it near impossible to communicate with each other, while finding more confusion than comfort in their relationships with the world wide web.

The writer provided dynamic, a multi-layered and deeply poignant narrative which allows for loads of play in the rehearsal room because, although he gave a list of characters, he also gives the guidance that the mother of the piece would be played, for the most part, by the audience themselves, with lines projected or made available through some other means … and also deemed it unnecessary to assign any of the lines to any of the characters per se.

The upshot of which is that our version is exactly that … it’s ours … our interpretation of how these words could be shared in order to best serve the storytelling.

The cast and other creatives involved are just as engaged and enchanted as I am with the process, looking forward to opening the show on the 24th of May for the closing week of the Brighton Festival, finishing on June the first.

Every day has been a voyage of discovery piloted by our trusty skipper Sandie Armstrong, a powerful actor and storyteller in her own right.

So, at the moment, I am waking up in the morning with a smile and a spring in my step.

Here’s wishing you joy in your endeavours …. and if you are in the area of the south coast of England, come see us … it’s going to be good.

You could also find out more about who I am and what I do at dodgerphillips.com